I’ve already established that MyFax is slowly going down the tubes. The following chronicles my experience switching to a new service.

After some research, I settled on MetroFax as my new internet faxing provider. They’re based just a few hours away from me in the beautiful Pacific Northwest, and don’t appear to be attached to any large corporate conglomerate of faxing companies. They’re a little cheaper too, which I can’t complain about.

Now, here’s the important thing to note: MetroFax doesn’t allow porting from MyFax numbers, because I believe they’ve historically had problems with MyFax releasing numbers. Go figure. They must’ve been burned pretty hard to not even bother trying anymore.

So how do you get to MetroFax without losing your number? The answer is NumberGarage.

As mentioned in the comments, you can only port a number out of MyFax that you originally ported in. Section 19 of the MyFax terms goes into the particulars on this, but essentially when signing up for their service they do not provide you with permanent access to the phone number if they assign it to you, and retain the right to take that number back and charge you money if you try to port it away.

MetroFax has a similar stipulation (see Limited License To Use; Limitation of Transfer Rights), so as much as I’ve been pleased with their service, this is something to keep in mind.

FaxLogic will actually allow you to port a number out that they’ve assigned to you, so if you don’t already have a faxing service and are thinking about starting out, this is a good option to consider.

(So no warranties here. Consider this an educational example of a possible process. I’m not liable if your experience is different that what’s documented here.)

Porting from MyFax to NumberGarage

Signup is painfully simple. Your account number is your fax number, after which you provide some contact information and carrier transfer info. There’s a $29.95 charge for the initial port, but for me that was better than losing the number or staying with MyFax.

You’ll also setup whether you want to park or forward your number. If you want interrupted faxing service, start up a trial account with MetroFax, and then set up forwarding in NumberGarage to forward to the number they assign you during the trial.

Providing a bill is the last step, and it’s a little tricky, as MyFax doesn’t provide you with a bill that shows your phone number. I ended up printing the bill, then taking a few screenshots highlighting my account number and phone number for verification, then zipping it all together and sending it as proof. 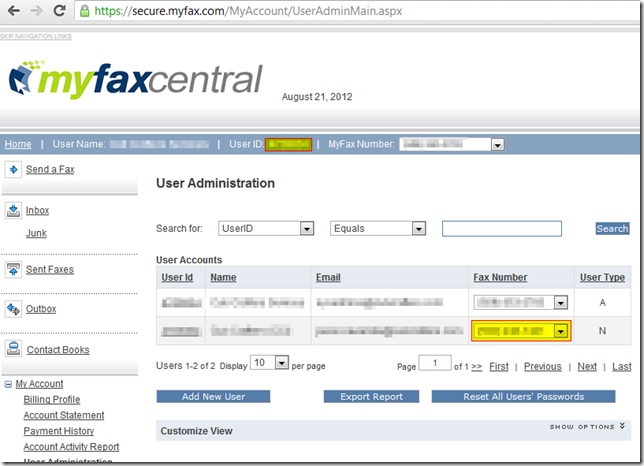 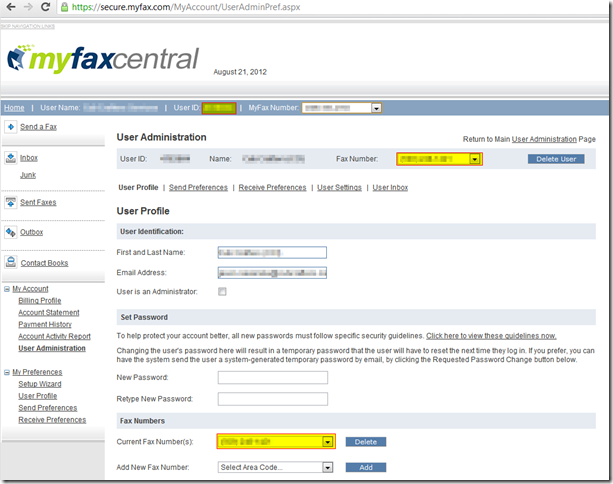 You’ll receive an email after they confirm the port request, followed by a estimated porting date. 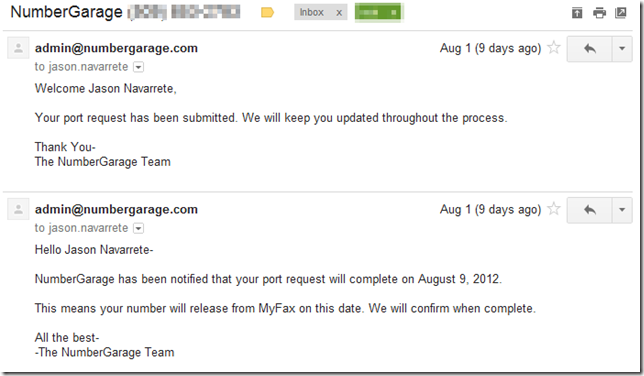 Then you wait. And a few days later, success!

The process here is about as easy as the first port. Make sure you’ve converted from the trial to a full plan, then contact MetroFax’s porting department, and they’ll send you over a Letter of Agency/Authorization (LOA) document to fill out. NumberGarage gives you a PDF bill the instant you sign up for their service, so attach that to the email with the signed LOA, and that’s all you need! Note that there’s another porting fee here, but it’s the price of doing business, I guess.

MetroFax will confirm with you that you want to replace your temporary number with the ported one, and then you wait.

A few short days later, you’ll be greeted with a welcome email with your ported number, and you’re done!

Be sure to cancel your MyFax and NumberGarage services at this point, or they will both probably gladly keep charging your card for services you no longer need. You could probably cancel MyFax immediately after porting out to NumberGarage, but I figure waiting until the whole process is completed is a little safer.

Prior to finding out about NumberGarage, I did another port from MyFax to MetroFax through a VOIP provider, and while it worked just fine, the process was much more convoluted than using NumberGarage. I also considered having our phone provider handle the port. NumberGarage just worked, and was easy to use.

Let met know in the comments if you find another service that works for you, or if MetroFax is ever able to start porting directly from MyFax.